Skip to content
Home » Articles » Fast food hazards: for which organs they are most damaging? 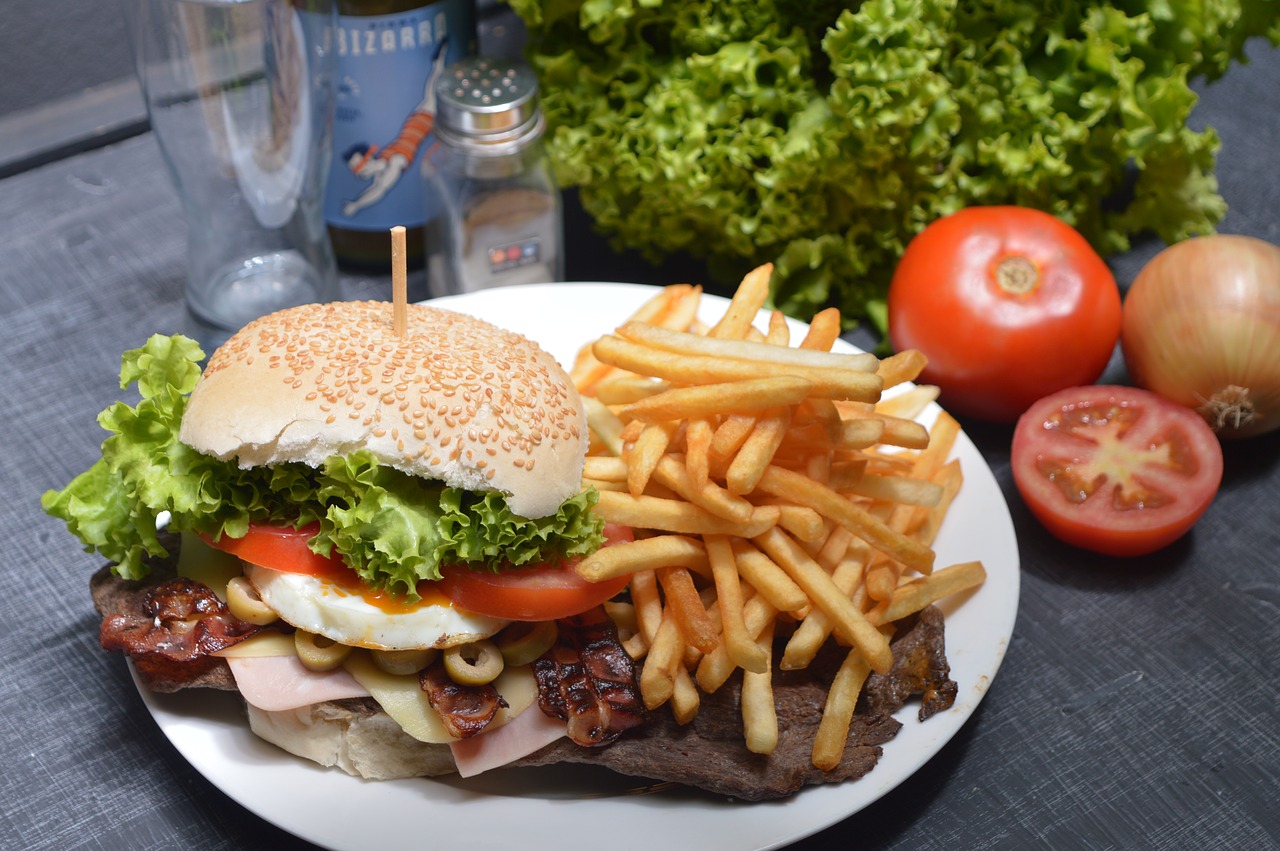 The negative effects of fast food is discussed often, but the snack business is booming, and a growing number of overweight adults and children are walking the streets. Therefore, lets overview the latest research, the results of which will make you think twice before ordering another burger.

The popularity of fast food restaurants is surprising. There are about 160 thousands fast food restaurants in The United States, about 50 million Americans visits them daily. It is no secret that almost 31 percent of US population is overweight. Number of obese children is already chasing that of adults. Excuse for this is fast pace of life, which forces to choose a quick meal. However, scientists believe that it is a fast food that encourages the desire to live more quickly.

Canadian scientists have conducted an interesting study. They observed the behavior of 57 volunteers. Some of them were shown logos of six fast food chain restaurants, such as McDonald’s or KFC. It was measured how quickly the study participants read a few hundred words of text before seeing the logos and after. It was found that after seeing the logos people read faster.

In the second part of the experiment volunteers were asked whether they would prefer to immediately get a smaller amount of money or a larger sum in a week. It turned out, that people who were shown the logos were not inclined to wait and would rather take smaller amount of money. According to the Professor of University of Toronto Chen-Bo Zhong, who led investigation, fast food promotes the effective use of time and desire for quick satisfaction. However, the problem is that, when faced with fast food a person feels the need to save time, even when there is enough time. One only needs to look at people sitting in fast food restaurants on weekend and watch how fast they eat even the largest portions of food…

That’s how never short of humour doctor Drew Ordon calls a quick meal. Laughter in jest, but studies have shown that eating fast food constantly is damaging not only beautiful body lines. One of the most vulnerable organs is the liver. Studies have found that eating fast food causes damages very similar to the consequences of hepatitis. Especially dangerous are the french fries, because they have a variety of harmful substances. Most of us do not even know that before roasting they are covered in sugar and sprinkled with salt. Burning sugar makes them crispy and golden in color.

Onion rings and fried chicken are also very bad for liver. According to the doctor, fat consumed with fast food leads to a condition called fatty liver. Such changes in liver enzymes resemble hepatic symptoms due to hepatitis.

Liver function is not the only health indicator showing fast food threat to health. Children who eat a lot of fast food, tend to suffer from asthma. British scientists conducted a study, which involved half a million children in two age groups. Questionnaire about their health was filled by parents or guardians. They examined children’s eating habits and their health status. It was asked whether the children not having cold were having difficulty breathing, blocked noses. For the purpose of objectivity of the investigation, additional questions about children’s activity, weight, mother’s addictions during pregnancy were asked. It turned out that fast food is the only type of food directly related to asthma. If fast food is eaten three or more times a week, 13-14 year olds develop severe asthma 39 percent and younger children 27 percent more often than usual. Fast food also increases the occurrence of severe rhinitis.

Eating fast food is resulting in increased glucose and insulin levels, damaged blood vessels. These factors may even lead to blindness and limb amputation. In addition, insulin is associated with brain activity – it helps to maintain healthy brain blood vessels and help brain cells (neurons) absorb sugar. Healthy neurons collect information, or in other words, remember. Insulin is associated with certain chemicals in the brain, assisting in communication.

After eating fast food, sugar levels in blood rise significantly. Insulin transforms sugar (glucose) into fat and accumulate it in fat cells, muscle, and liver. Eventually they start to resist fat reserves transported by insulin, so we need more and more insulin to overcome the resistance. Excess insulin is very harmful to the brain, because the neurons ties start to jam, therefore suffers brain activity. Insulin resistance is associated with brain damage – heaps of damaged proteins emerge. They are considered to be one of the main symptoms of Alzheimer’s disease.

Survey carried on US students’ progress and their dietary habits, revealed that fast food is bad for the human brain. Knowledge tests carried out by children who ate fast food at least three times a week, i.e. Hamburgers, hot dogs, chips, etc., were lower by several percent than the average of other students. Scores were lower in mathematics, English and other subjects tests.

Vanderbilt University (USA) researchers studied more than five and a half thousand children, and the results were obvious. All children who ate fast food at least three times a week, studied less well.

The popularity of fast food mystery was solved by Scripps Research Institute (USA) scientist Paul Kenny. The researchers conducted experiments with rats and found that there is certain connection between fast food and obesity, caused by the desire to eat unhealthy food. For some time rats were given an unlimited amount of high-calorie food. It was observed that they got used to such a menu very fast and were eating even when they knew they’ll get electric shock for that. Need for fast food is so strong that it will not overcome the fear of getting fat. Rats that were eating salad leaves and grains, in an emergency easily refused these delicacies. Accustomed to fast food rats even were “announcing” a few weeks hunger strike if they were not getting fast food, even though they were given healthy food. After receiving fast food they would gorge and await the next portion, whenever it may come.

Fast food does not spoil

Not less dreadful is the fact that some types of fast food do not spoil. American Sally Davies and Joann Brusco bought sets of children’s Happy Meals in McDonald’s eateries. Both women put Happy Meal sets on the shelf at home and waited until these spoil. S. Davies photographed every day how hamburger and french fries looked. In one year, the woman was tired, because, only tantalizing smell disappeared and food remained unchanged.

The second observer J. Brusco’s study continued for one year. The results were the same – food remained unchanged. Women are joking that eating such a food often can secure the afterlife not only for the soul but also for the body. For a variety of synthetic materials present in fast food, the body shouldn’t decay for a long time. Unfortunately, such longevity gives little comfort, as the quality of life becomes very poor – we feel tired, have no energy, we cannot concentrate on education and work, because there is almost no nutrients in fast food. Abuse of fast food in the long term can lead to hypertension, heart diseases.

Check out our latest articles:

Energising food
Trying to lose weight this winter? These 4 tips will help you
Immune-boosting diet
Water is vital for the body
Let’s enjoy healthier desserts
What to eat after antibiotics?
Different weight-loss strategy: improve your liver function
Nutrition values of dried fruits
The urge to something salty, what does it mean?
Cooking habits preventing weight loss
The benefits of bananas – cures hangover, alleviates PMS symptoms
TOP 10 mistakes in meal preparation
We use cookies on our website to give you the most relevant experience by remembering your preferences and repeat visits. By clicking “Accept”, you consent to the use of ALL the cookies.
.
Cookie SettingsAccept
Manage consent

This website uses cookies to improve your experience while you navigate through the website. Out of these, the cookies that are categorized as necessary are stored on your browser as they are essential for the working of basic functionalities of the website. We also use third-party cookies that help us analyze and understand how you use this website. These cookies will be stored in your browser only with your consent. You also have the option to opt-out of these cookies. But opting out of some of these cookies may affect your browsing experience.
Necessary Always Enabled
Necessary cookies are absolutely essential for the website to function properly. These cookies ensure basic functionalities and security features of the website, anonymously.
Functional
Functional cookies help to perform certain functionalities like sharing the content of the website on social media platforms, collect feedbacks, and other third-party features.
Performance
Performance cookies are used to understand and analyze the key performance indexes of the website which helps in delivering a better user experience for the visitors.
Analytics
Analytical cookies are used to understand how visitors interact with the website. These cookies help provide information on metrics the number of visitors, bounce rate, traffic source, etc.
Advertisement
Advertisement cookies are used to provide visitors with relevant ads and marketing campaigns. These cookies track visitors across websites and collect information to provide customized ads.
Others
Other uncategorized cookies are those that are being analyzed and have not been classified into a category as yet.
SAVE & ACCEPT